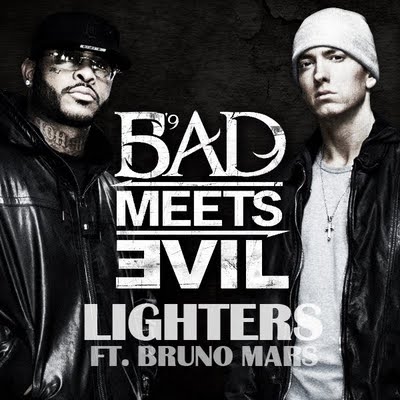 We finally have our very own website and want you to follow us over. There are still a few technical kinks we need to figure out, but we’re moving on up nonetheless.

DIVAMISSION.COM is the new address!!!!!! Check us out and subscribe to our email list, so we can continue to give you your POPculture Re-Up!!!!

Thanks for a great first year….we look forward to many more

Rich Lee has created an inspirational visual to go with the equally inspirational sounds of “Lighters,” the Bruno Mars-assisted single from Bad Meets Evil- Hell: The Sequel.  Eminem and Royce da 5’9 take it back in time, reminiscing on their come-up; Em with his blonde hair and Royce writing rhymes behind bars.

Bruno is doing what he does best: singing in front of a piano.

Sidenote: How the hell does Bruno get his hair to stand up like that?! Watch below:

The force that is Eminem and Rihanna took over the V festival in the U.K. The duo performed their hit song “Love The Way You Lie” in front of adoring fans, one of who whipped out their camera and recorded the performance. Rihanna performed earlier in the day at Stafford’s Weston Park, the performing never ends.

According to Rolling Stone magazine, Eminem is the new “King Of Hip-Hop”. The coveted title is based upon album sales, social media scores and Youtube views. The mag handpicked 20 solo rappers who have come out with new music from 2009 to the greater portion of 2011.

Taking the #2 spot is Lil’ Wayne with a compilation of album and ticket sales, online ratings, and awards. And you know Drake wasn’t far behind, he takes spot #3. Nicki can also be seen on the list taking spot #6. Check out the list below. 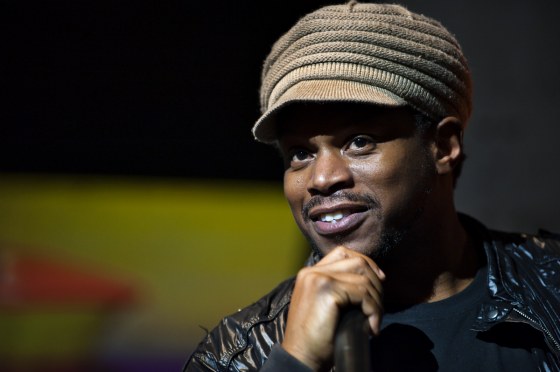 “You played such a vital part in my career and such a big role in hip-hop, we’re just happy to have you.”

After asking Em to freestyle ( “It might be dial tone,” Em replied), Sway played his first interview with Eminem after he first signed with Dr. Dre.

Sway also played a portion of an interview with the legendary Tupac Shakur on the set of the “How Do You Want It” video.  Pac talks about California and the east/west coast:

Sway reflected on his first show with his MTV family afterwards:  “All in all, it was good.  We played a lot of hip-hop music and made a good relationship [with the listeners]. I’m going to try to tie in all of these worlds: MTV, Shade 45, pop, politics, culture, music, all of that. At the end of the day, that’s the vision for the show.”

Skylar Grey- “Dance Without You” [Video]

Skylar Grey has truly been on the come up since collaborating with some of the biggest names in the game such as Lupe Fiasco, Dirty Money and Eminem. She now takes the lead in her own video for “Dance Without You”. Inside a hospital room Skylar sings:

“So insecure, so uptight. I break my neck, to be polite,”

The video is expressive of Skylar shedding her former self and coming into her own. Watch below.

Eminem is an artist who has been groundbreaking and record-setting since he first came on to the scene. He can now add another record to his lucrative lists of accomplishments. Eminem has now become the very first artist to sell 1 million digital albums. His comeback album Recovery has crossed that threshold shortly after the debut of  Hell: The Sequel collaboration EP with Royce da 5’9, which grabbed the #1 spot. Eminem’s manager Paul Rosenberg says:

“We are thrilled to congratulate Eminem on the history-making digital sales success of Recovery. Over the years we’ve made a concerted effort to engage Em’s online fan base so this achievement is especially rewarding. Eminem made an amazing album with Recovery and the fans responded in record numbers.”

The fans sure did! Congrats to Em and all his success.