Emma Watson looks super grown up and sophisticated in this month’s Vogue issue.  Besides posing for fabulous photos, Emma talked about a wide variety of subjects; one of them being Harry Potter of course:

On her idol Patti Smith’s 2010 memoir ‘Just Kids’: “I want to live like Patti. I want to write like Patti … The book was so honest and brave. I loved the way she sees the world. I really felt that life was more beautiful after I read it, and I felt more hopeful.”

On the “bubble” that ‘Harry Potter’ created for her: “I have had no control over my life … I have lived in a complete bubble. They found me and picked me for the part. And now I’m desperately trying to find my way through it.”

On her co-star Daniel Radcliffe: “He understood what his role was … not just as an actor but as the leading man in this enormous franchise. And I think that was almost more important in a way. He held it all together. I am very grateful for him.”

On getting advice from fellow notorious multitasker James Franco: “It was such a relief to speak to someone who is trying to do the same thing I’m doing. I talked to him about juggling studying and making films and going backward and forward. He’s not afraid or limited by what he fears people will say about it.”

On love: “I’m a feminist, but I think that romance has been taken away a bit for my generation. I think what people connect with in novels is this idea of an overpowering, encompassing love — and it being more important and special than anything and everything else … I would love to not date someone in the same industry as me. Otherwise it becomes what it means to everyone else.”

On life after Hermione Granger: “Hermione is so close to who I am as a person that I’ve never really had to research a role … I’m literally rediscovering what it means to be an actress. … I’ve probably earned the right to screw up a few times … I don’t want the fear of failure to stop me from doing what I really care about.”

Emma is extremely well-spoken and seems to have a good head on her shoulders. I can’t wait to see her in other roles besides Hermione. 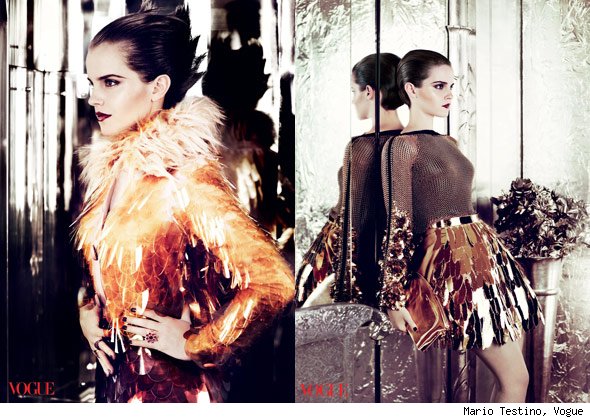 This entry was posted on June 13, 2011 by divamission. It was filed under Film, Magazine and was tagged with daniel radcliffe, emma watson, harry potter, james franco, vogue.